When we first got a glimpse of Jared Leto’s Joker, we were left with… bewildered. He looked more like the star of a shock rock band than a homicidal maniac. But that’s only because we don’t normally think of shock rockers as killers with bodies buried in their basements.

Then, Empire Magazine treats us to a full-bodied reveal of Leto’s Joker in costume on its cover. And we can’t tell whether to laugh, cry or start head-banging in a mosh pit. But certainly no quaking in fear of whatever madness may reside within. 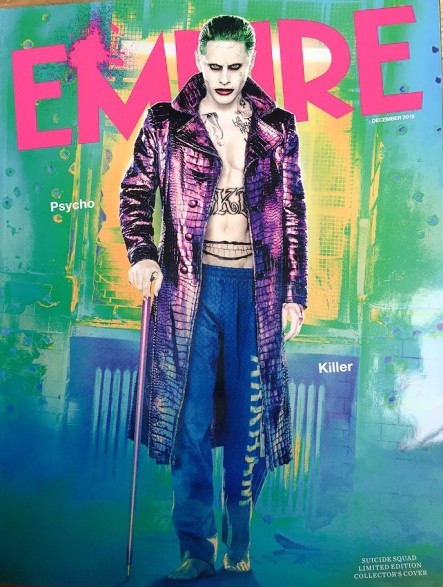 Sure, it’s not fair to compare Leto’s Joker to Heath Ledger’s award winning depiction of The Clown Prince Of Crime… but this version could do with a little more terror and less of a I-am-going-Goth-to-rebel-against-my-conservative-parents vibe.

That said, Leto does seem to have the right frame of mind when it comes to being the Joker. Empire Magazine reports that Leto feels the Joker, “would probably just say, ‘F**k you,’ and hang up,” when it came to an interview with the magazine. It goes on to tell about how Leto method acted his way during the shoot, never breaking character. Apparently, coming up with this version of the Joker was, for Leto, “very painful, like giving birth out of my prick hole.”

The interview revealed more insight into the mind of the Joker. Leto talked about how he listened to he listened to 1920s gospel music and read literature on shamans while playing The Joker. Producer Charles Roven also revealed that the villain’s dress sense has been inspired by Mexican cartels, while he’s now, “More social…a very successful and smart businessman besides being a sociopath.” Director David Ayer explained how Leto’s Joker will differ to what’s come before on the big screen:

“The Joker is the third rail of comic book movies. There’s a power to that character, and by some freaking miracle, through the incredible things Jared has done and the photography and all the other millions of things that went into it, we’ve cooked up something transcendent. He’s scary.”

All of which basically tells us… nothing.

Oh yeah, there was this one image released that made us think of the Joker as depicted in Frank Miller‘s seminal “The Dark Knight Returns“:

We’re still holding our breath to see how this version of the Joker plays out. The little that we saw in the Suicide Squad trailer has us holding back our nerd-rage… for now. 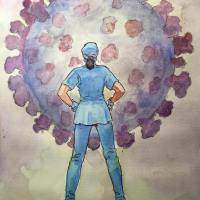