Famed British comic book writer Warren Ellis recently revealed in his recent newsletter that former Marvel Editor Christian Cooper once made an issue of Marvel’s Swimsuit Special “the gayest thing you ever saw.”

You might recognize Christian Cooper as the birdwatcher who was racially profiled by a woman who called the police on him when he asked her to leash her dog in Central Park, New York City. Ellis, who enjoyed working together with Cooper at Marvel Comics, humorously recalled how Cooper was assigned the special and proceeded to make it pretty homoerotic. He wrote:

I saw my old colleague Chris Cooper in the news — some crazy racist woman tried to have him killed by cops in Central Part. I knew Chris when we were both at Marvel. He was a lovely guy, and I enjoyed his company immensely. We definitely got slightly drunk together at a Marvel summit out in Glen Cove. I always liked him a lot. He did one of the funniest things I ever saw at my time at Marvel. Back then, Marvel would release a summer book called the Marvel Swimsuit Issue, which was exactly as awful as you think it is. What they used to call “fan service” and “good girl art.”

Except one year Chris Cooper somehow got hold of it. And that year’s issue was the gayest thing you ever saw. Like, gaydar installations all over the Northern Hemisphere just straight up burst into flames. Anyone who beheld that book from a distance of twenty feet became, by genetic testing, 3% gayer. It was so fucking funny, it was so not what Marvel did at the time, and it was so well played.

Chris, wherever you are, I hope life is becoming more peaceful.

So, was this particular Marvel Swimsuit Special “the gayest thing” you’ve ever seen? Well, you tell us: 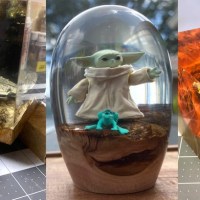